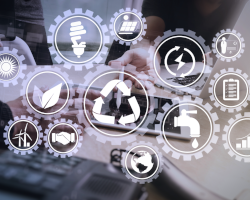 International trade is usually seen as a positive factor contributing to the growth of developing countries. However, it can also lead to serious imbalances and increased public debt.

What is the offset mechanism?

Offsets are large-scale operations that take place when a foreign company contracts for a significant amount, generally in excess of one million dollar, with a public authority.

The seller is subject to a binding obligation to compensate a percentage of the original contract amount by creating local added value in the buyer country.

This value can be created in a way that is either directly linked to the original contract, for example, through relocating production facilities or transferring technology to the buyer country, or indirectly, through investing in assets or trading commodities separate from the original contract.

What are the benefits for exporters?

Offsets are a tool available to large public or private companies to facilitate export to developing countries by contributing to their local development. As a result, and depending on the nature of this local development, offsets may also contribute both to the sustainable development strategy (CSR/ESG) of the exporting companies, and to climate change mitigation.

What are the benefits for importing countries?

Through the offset mechanism, a developing country can enhance its import efforts and international openness, and support sustainable development with high economic, social and environmental impact projects. This is of particular interest for nations with a trade deficit, through:

– limiting the outflow of foreign currency

– promoting the export of domestic products, particularly for products with low competitiveness and access to international markets at a lower cost (indirect offset obligations)

Compared to other forms of international trade, offsets offer the additional benefit of preventing corruption. Because the local development project is directly funded and implemented by the foreign company without any money transfer to the national authority, it limits the risks of fraudulent commissions or misappropriation.

Many countries have implemented industrial compensation policies to promote the development of their economies. The amount of commitment generally represents a percentage of the amount of the public contract signed (between 30 and 100%) and contributes to the development of the country’s economic activity. Although the first contract including offsets dates back to the 1960s, the process has only developed rapidly in international trade since the 1990s.

Initially, offsets were used by large industrial groups in the defence, energy, transport and telecommunications sectors and by countries that did not have sufficient human or financial resources to build a local industry or provide cutting-edge research and federated state services for its citizens.

Today, offsets are used by more than 150 countries in one form or another, for an annual value ranging between USD 50 and 150 billion. By comparison, in 2017, the aid distributed by the 30 members of the OECD’s Development Assistance Committee (DAC), which brings together the world’s major donors, amounted to USD 144.16 billion.

Given the cumulated value of the offset contracts and its potential impact on the development of local territories, it seems relevant to apprehend offsets as one of the tools for development aid. Moreover, in the context of economic diplomacy, offsets may be used to facilitate a relationship between states and contribute to the closing of international trade contracts.

1 – Crisis between the European Union, Indonesia, and Malaysia

Palm oil is the most widely traded vegetable oil globally, with demand projected to increase substantially in the future.

Indonesia and Malaysia are major palm oil-producing countries. Almost all oil palms grow in areas that were once tropical forests. Some oil palms have been grown quite recently. Indeed, the conversion of forests to grasslands for palm oil production would represent an average of one-fifth of national deforestation in Indonesia. Such deforestation, especially through fire activity, not only threatens biodiversity but also increases greenhouse gas emissions.

As a result of the deforestation currently taking place in Indonesia, Europe decided to ban imports of unsustainable palm oil from these countries. In retaliation, Indonesia filed a claim with WTO against the European Commission. They also undertook measures such as halting orders of Airbus jets, stopping the export of nickel to the EU, and banning the import of alcohol from the EU.

Although the palm oil export to Europe is not significant when compared to the export to China or India, the reputational and economic risk for Indonesia and Malaysia is high. If China or India were to follow the EU and ban the import of unsustainable palm oil production, there would be disastrous consequences for the Indonesian and Malaysian economy.

One solution for Indonesia and Malaysia to foster business relationships with European industrial groups would be to develop sustainable palm oil production. This could be done through a project providing an educational and training platform for ASEAN with a sustainable agroforestry curriculum. Offsets could be used to finance such a project and then strengthen the relationship between stakeholders. It can be also strongly differentiated – by achieving several sustainable development goals – as Corporate Social Responsibility policy or as Environmental Social and Governance criteria.

China and India are large economies that import both industrials goods and palm oil. This is an opportunity for industrial companies trading with these countries to improve their offers by using offsets based on palm oil.

Should you be interested, as the European Offsets Countertrade Association* representative in Southeast Asia, I can be reached by email: estelle.forget@ergapolis.sg

You can also visit our website to learn more about what we do.

*European Club for Countertrade and Offset is an association under the French law of 1901, a forum for thought and exchange on international industrial offsets, made up of major industrialists and French and European experts. More information on our website: www.ecco-offset.eu